I just saw Miley Cyrus in Times Square and got a photo! 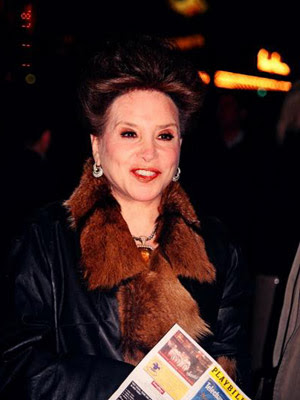 Only in NY kids, Only in NY!
Posted by BANGBANGSHOW.COM at 9:15 PM

Posted by BANGBANGSHOW.COM at 8:08 PM


bring fur to throw at people as they walk out
Posted by BANGBANGSHOW.COM at 11:20 AM

kids-stop wearing helmets when bicycling, it makes you look nerdy and effeminate!

Posted by BANGBANGSHOW.COM at 10:01 AM

Should we give up our subway seats to gum chewing, skylarking girls?

Posted by BANGBANGSHOW.COM at 8:02 AM

From: Justin Massler
Date: Sun, 16 Aug 2009 07:45:11 -0400
Subject: Important Message for All New York Observer Reporters
Good day reporters of The New York Observer, would anyone like to help save horses on this fine summer day?
I will explain the situation I am writing in regards to.
As some of you may know, many horses are currently imprisoned as slaves being forced to pull carriages in Central Park for the amusement of tourists.
My name is Justin Massler and recently I was appointed by Angels to be the King of the Jews in the tradition of previous Kings such as Moses, David, Solomon, and Jesus.
I have been ordered by the God of the Jews to free the horses who are enslaved as carriage pullers in Central Park for the purposes of restoring freedom to the lands, much like how Moses himself had to free the Jews from their enslavement in Egypt so many years ago.
I have decided to commandeer The New York Observer for this purpose which I can do since it's owned by Jared Kushner who is a Jew and therefore one of my subjects which makes his properties subject to emergency commandeering if it is deemed necessary for Divine Purposes.
Anyways, does anyone want to help with this cool elite mission of animal rights heroism? We can use The Observer to launch a propaganda campaign to ban horse carriages and influence public opinion against this unjust practice.
I am therefore recruiting reporters from this paper to take part in this noble cause.
The website of my hero team is http://www.heroicdestinysquad.com/ so you can see that I'm legitimate and not just making this stuff up.
Hopefully someone will respond to this in a positive manner and I won't just be ignored by every single person like has happened to me before in the past which is a depressing thing to have happen, but I suppose such are the trials heroes such as myself must endure in our quest for justice at any cost.
Sincerely,
Justin Massler
President of Heroic Destiny Squad
http://www.heroicdestinysquad.com/
P.S.
Also, does anyone know Jared Kushner's phone number or personal e-mail address? Or better yet, does anyone know where he hangs out?
I figure since he's the owner of The Observer I can commandeer it more quickly if I just get Kushner to agree to this plot himself.
I tried sending him a message before but I think he's trying to avoid me even though I'm his King which is like how sometimes kids try to hide from their parents. Is it true he lives at 21 Astor Place above the Starbucks? If so I can just try to find him at his house and talk some sense into him.
If anyone can give me any info on where this guy can be found it would be much appreciated.
Cheerio.
Posted by BANGBANGSHOW.COM at 3:59 AM 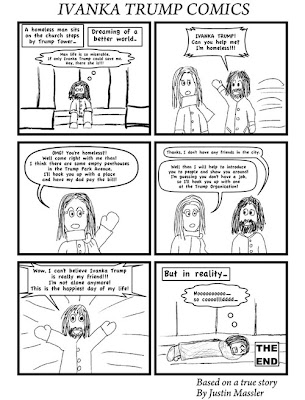 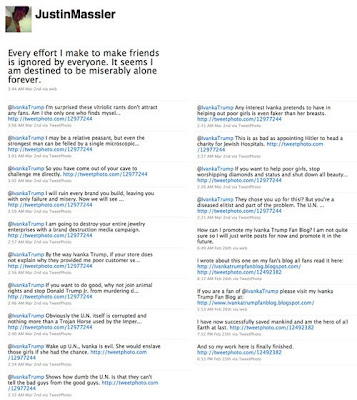 on the face of it these charges against Justin Massler (aka "Cloud Stormchaser" not so bad for a stupid made up name - would be a good cheesy weatherman name "Cloud Stormchaser here with you with your weekend weather forecast" ) for allegedly stalking Ivanka Trump seem to be complete bs...(I have only been able to see some of his tweets and his blog so perhaps there is something I havent read yet - but I'm guessing there wont be anything truly criminal. The worst I have seen so far is a tweet that appears to ne threatening to harm her jewelry's brand reputation)...being that he is mentally ill though (according to his mom) they probably wont fight the charge..and will end up making some sort of plea/agreement with the state..but if you look at his writing it is intelligent and expresses a common longing to be rescued..I love how the gossip rags are making it that he is so bizarre..Gawker's headline is "Diary of a Madman" (do they mean that tongue in cheek or are they serious?)...read his stuff, not so bizarre (and yes I know he has scary eyes - do did Jesus)


here is some stuff from his blog below


Today on Ivanka Trump’s Twitter she posted a picture of the view outside her office. I almost couldn’t believe it when I saw it because it turns out her view is of the top of the Fifth Avenue Presbyterian Church.
I used to be homeless in New York City awhile back and sometimes I slept on the steps of that church. I remember I would always sit on the church steps praying that Ivanka would come by and save me from the pain, but sadly she never did.
I would close my eyes and futilely try to use some kind of telepathic power to contact her. Or pray that by chance she would walk out of Trump Tower and head right towards me and we would hit it off and become the best of friends.
But alas this never happened.
It was like Hell being trapped there homeless, a Hell that I couldn’t escape from. Looking at this picture it really brings back memories of a time of great suffering.

I remember looking up at Trump Tower wondering which one was her office, wondering if I could even see it from my vantage point. I guess I would have been able to after all if I had known where to look.
I wonder if when Ivanka looks down on the street she knows that there are homeless people down there praying for her to save them. I know I wasn’t the only one who thought this way, that’s for sure.

Would Ivanka even care or would she just laugh at the idea?

Sometimes on The Apprentice she comes across as a pretty callous person without a lot of empathy. I remember once in an interview she said she gained great amusement from seeing former friends stab each other in the back and another time she said she did not feel a lot of sympathy for the complaints of the contestants. So she might not even care at all or even find the whole thing amusing.

I wonder which of these types Ivanka is.

Anyways, even if Ivanka never did show up to answer my prayers, I could at least dream and for a brief moment those dreams took me away from the harsh reality I faced. Here is a comic I drew of those times:

....." <- end Justin's writing his comic and tweets are above you can click on them to make larger
Posted by BANGBANGSHOW.COM at 3:33 AM

Posted by BANGBANGSHOW.COM at 1:49 AM

there is a certain feeling of freedom one gets

when a completely ungettable girl you longed for in your youth transforms into a pig (and no, this is not referring to any women I knew grewing up whose facebook pages I look at, its just something I imagine happens sometimes)
Posted by BANGBANGSHOW.COM at 6:07 AM

TAKE BACK THE NIGHT!

Resist government tyranny/phony liberal do gooder types that want to control your life..do NOT set your clock forward..if enough people do this, 2am will remain 2am..TAKE BACK THE NIGHT!
Posted by BANGBANGSHOW.COM at 9:23 PM