straightening up my place, watching the Ted Kennedy memorial, hoping they will bring out Michael Jackson's kids to say a few words

Posted by BANGBANGSHOW.COM at 8:28 PM

you can learn more about Buddha and the path to enlightenment - here
Posted by BANGBANGSHOW.COM at 9:34 AM 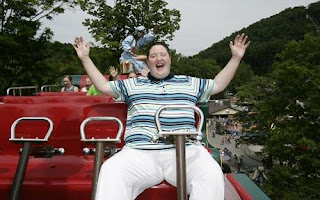 Woman getting married to fairground ride

Amy Wolfe, a US church organist who claims to have objectum sexuality, a condition that makes sufferers attracted to inanimate objects, plans to marry a magic carpet fairground ride. “I love him as much as women love their husbands and know we’ll be together forever,” she said.
Miss Wolfe first fell for the ride when she was 13: “I was instantly attracted to him sexually and mentally.
“I wasn’t freaked out, as it just felt so natural, but I didn’t tell anyone about it because I knew it wasn’t ‘normal’ to have feelings for a fairground ride.”
Ten years later, she decided to go back to Knoebels Amusement Park to declare her love. She now sleeps with a picture of the ride on her ceiling and carries its spare nuts and bolts around to feel closer to it.
She claims to believe they share a fulfilling physical and spiritual relationship and does not get jealous when other people ride it.
Although she faces discrimination from employers, most of her family and friends have been supportive. “I’m not hurting anyone and I can’t help it," she said. "It’s a part of who I am.”
Posted by BANGBANGSHOW.COM at 8:50 AM

loved how at the end of the vote, Sotomayor jumped up on top of Senator Rockefeller's desk, ripped off her business suit and was wearing short shorts

and a belly shirt (made out of PR flag)..and it was sweet how Senator Kennedy struggled to hold up the boombox, and Mr Microphone as he sang " Living La Vida Loca"
Posted by BANGBANGSHOW.COM at 1:42 PM